After an invitation by the transport company Lomprayah I recently joined this 3 Days and 2 nights trip to the Gulf of Thailand. This bus and ferry service is basically the only alternative to a flight between Phuket and Koh Samui, it's a good solution for those travelling on a tighter budget or when the few direct flights available daily are sold out. Of course the travel time is quite longer compared to a flight and you arrive at destination a bit tired, though in the overall the trip is comfortable and very well organised.

There are now two trips scheduled daily from Phuket to Koh Samui, one with early departure at 7:00 and a later one with departure at 10:00. For this occasion we were on the early trip, of course it's harder to wake up very early in the morning though I guess this is a better choice when people don't have many holiday days available, this way you don't waste a whole precious day just travelling especially considering that here in Thailand the sun sets quite early.


The meeting point for the start of this inspection trip was in Patong, though for the regular trips there is free pick up at all hotels in the main areas like Patong, Karon, Kata and Phuket Town. We started our trip right on time as soon as all the passengers were gathered. On this day we weren't many people travelling so we used two minivans rather than a larger coach. The air conditioned vans were clean and comfortable with and the staff made sure that there was plenty of space for passengers and luggage without squeezing anyone.

The driver safely drove us north over the Sarasin Bridge and then east trough Phang Nga, Krabi and Surat Thani provinces. The landscapes that can be seen out of the window are very nice, especially on the road to Krabi which is immersed in green lush vegetation and limestone karst formations. We had a quick stop half way at a service area for those who had to go to the restroom and to buy some drinks and snacks, then we finally reached Donsak Pier in Surat Thani around 11:30. The Lomprayah staff at their office at the pier gave us some free snacks and water while we had to wait for the ferry departing one hour later. There was a waiting area with chairs in the shades so the wait wasn't too bad.

At 12:30 the ferry was ready so we boarded and quickly started cruising towards Koh Samui. The ferry is a large high speed catamaran with three decks: the lower deck hosts the large Standard Class with the bar, on the middle deck are a shaded outdoor seating area plus the VIP and Exclusive rooms (accessible by paying a little surcharge, see pictures below). while on the open air upper deck can find several benches for the sun lovers though keep in mind that with the high cruising speed it gets quite windy up there. 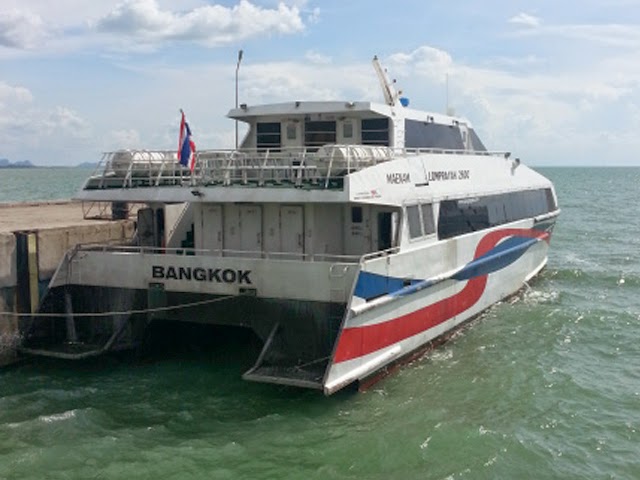 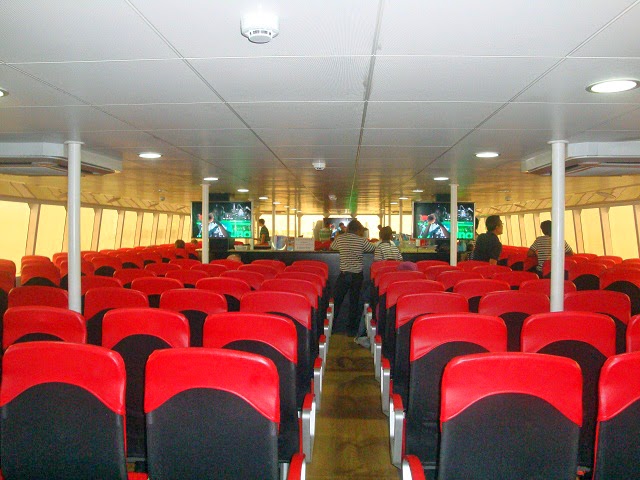 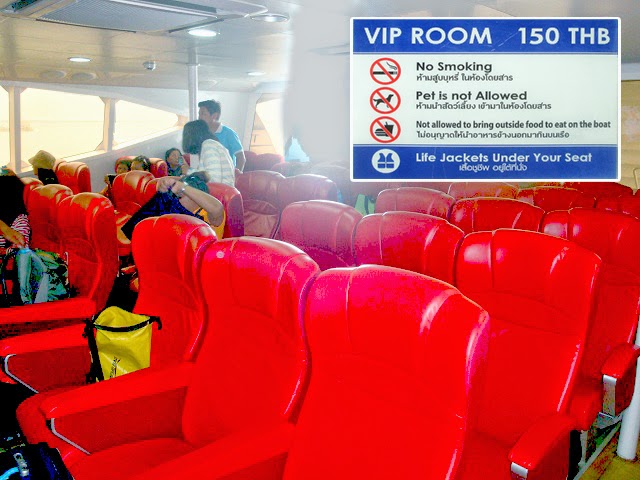 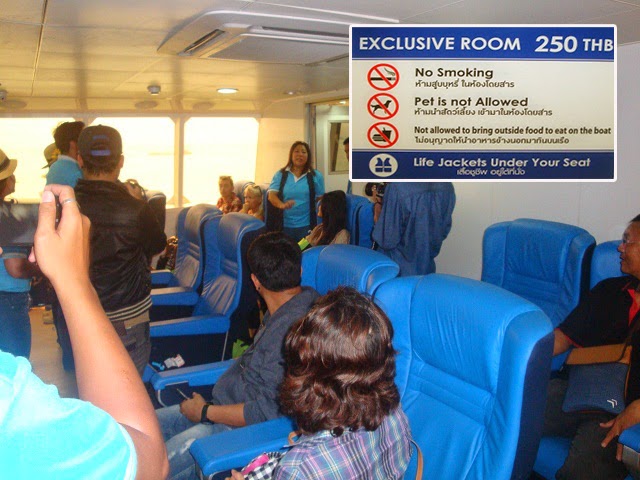 The ferry is really "high speed" and it took just 45 minutes to get to Nathon Pier on the west coast of Koh Samui, the boat is very stable so the trip was smooth and comfortable, especially as I was in the Exclusive Room.  We had minivans waiting for us right on the pier and we quickly got transferred to a nearby restaurant for a tasty Thai lunch, while some of the other passengers stayed on the ferry which after Samui proceeds to Koh Phangan and then Koh Tao. Once back on the minivans we moved to visit the popular sightseeing site called "Grandfather and Grandmother rocks"  (Hin Ta and Hin Yai). The rocks are less than 50 meters far from each other and got this funny nicknames because they look, respectively, like male and female genitalia!

After this little sightseeing and driving around the island, in the late afternoon we finally got at Ibis Hotel on Bophut beach, on the northern side of Koh Samui. Here we spent both nights before returning to Phuket. The area is nice and quiet, I would say it's very suitable for families.

Another early wake up, ready for the day trip to Koh Nang Yuan Island offered once again by Lomprayah to show us the beautiful island and the facilities they provide. After some time for breakfast at the hotel we were transferred to Maenam Pier which is located on the northern coast of Samui, more conveniently for trips heading north. Once there we boarded the same ferry that we used on the previous day and around 8:00 we started cruising. After about 20 minutes we had a quick stop at Koh Phangan to drop off and pick up passengers there and then proceed further north until we finally reached Koh Nang Yuan around 10:00. This is the regular route and timing that the ferry does every day, and after Koh Tao proceeds all the way to Chumpon from where the passengers can then get the bus to Bangkok or other destinations in the north.

During the cruising I had a nap in the comfortable VIP room and when I got off the ferry I thought I was still dreaming because, before then, I believed that such a place could only exist in dreams. The tiny island is actually made up of three pieces of land which are connected by a huge white sandbar. The island hosts a very particular resort with the rooms hidden in the vegetation on the slopes, and the most of the shore is covered by large granite boulders among which can find a wooden walkway that allows people to reach the rooms and the pier.

As this was an inspection trip and not just for leisure, the staff accompanied us to see some of the rooms, there are many different types that can meet pretty much all budget, group sizes (the Grand Family room sleeps up to 7 people) and levels of comfort.

After looking at the rooms we hiked to the view point, to get there we had to walk for a while on the wooden walkways and then climb a good number of stairs but the view from the top is absolutely worth the effort, I guess the picture below speaks by itself!


Once back down to the beach, around noon, we had lunch at the central islet which hosts the only restaurant on the island and a small beach bar. Being on a small island of course most things purchased here will be a little more pricey than on the mainland. The menu is not so extensive but the food is of high quality.

Of course considered its layout and location the island does have a couple of drawbacks like certain times of the year there does tend to be a lot mosquitoes and there is obviously a limited supply of water but all this just adds the unique island way of life, if you like island in paradise setting then Koh Nang Yuan is the place to go.

In the afternoon we boarded a different boat for a short snorkeling trip on the east coast of Koh Tao. This boat was large and comfortable with a lot of space so it's perfect also for larger groups, it’s also ideal for inexperienced snorkelers or non swimmers because they have all sorts of flotation devises for you to hang on to. The snorkeling site was quite good even though we were there at high tide and visibility wasn't the best, however ours was a different tour from the regular one in which itinerary is planned every day to offer the best experience to the participants.


We had enough time to enjoy the snorkeling, then we went back to Koh Nang Yuan to get back on the ferry departing at 14:30 and return to Koh Samui. While in the morning the sea was calm, in the afternoon the weather got a bit worse and the sea became quite rough between Koh Tao and Koh Phangan, After years of diving nearly every day I am used to choppy seas and never suffered seasickness, but  I was still very glad to be on a large and stable catamaran ferry rather than on a small speedboat jumping from wave to wave and I'm sure most of the other passengers thought the same thing. The ferry was back at Maenam Pier right on time at 16:30, and as usual our minivans were already there to transfer us back to the hotel.

This last day, the return day, was obviously not much different from the first one except that we did the reversed route. We had the early start with pick up at 7:30 while ferry departed Nathon Pier at 8:30, though there is also a later ferry departing at 12:45 for those who prefer to sleep more and don't mind a later arrival in Phuket. Differently from the trip on day one, as this time we were more people, rather than in a minivan we were transferred by a large and comfortable coach.

We finally reached Phuket around 15:30, while with the late departure would have been around 19:00.